Home» Mindful Economics: How the U.S. Economy Works, Why it Matters, and How it Could Be Different 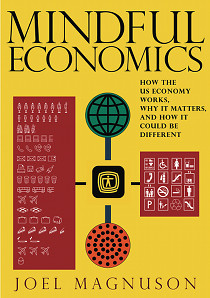 The path toward systemic change is laid out in the third part of Mindful Economics. Such change can be brought about by developing alternative institutions. As these alternatives evolve and grow, they will place the U.S. economy on a path to a new system. Systemic change will come about gradually by the will of people who purposefully steer the development of the economic institutions in their communities in a positive and healthy direction. To this end Mindful Economics lays a foundation for building new alternatives that are democratic, locally-based and ecologically sustainable. Such alternatives are not only viable, they can be found all across the United States. Through a network of alternative institutions, people can begin to build alternatives to capitalism and provide hope for future generations.
View this book at Amazon.
[testimonialswidget_list tags=”mindful_economics”]